Detuned Reactors prevent harmonic amplification caused due to RESONANCE and avoid the risk of overloading capacitors, thereby significantly reducing voltage and current harmonic distortion in the network. All connected equipment, and even remote substations are subject to voltage fluctuations which may result in equipment malfunction or failure. To avoid this problem, it is common to insert reactors in series with capacitor banks.

The reactor also by its nature will safeguard capacitor and associated switch gears against switching inrush, which other may damage capacitors, circuit breakers and contactors. 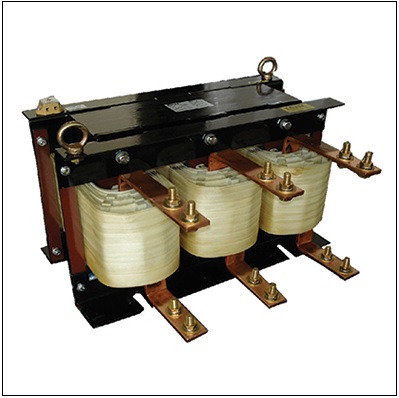 Why use Detuned reactor?

Presence of Harmonic distortion due to the  non-linear loads within the network or due to import of harmonic from grid or power source will increases the current flowing through capacitors as the capacitive reactance is inversely proportional to the frequency , consequently capacitors will be subjected to over load. The over load on capacitors can cause premature failure in capacitor due to increased voltage and thermal stress on dielectric.

On the other hand, the inductive reactance XL of a Reactor is directly proportional to frequency: The magnitude of inductive reactance will increase with high frequency harmonics thus blocking the harmonic current. Hence, use of  detuned reactor in series with capacitor will offer higher impedance for harmonics, thus eliminating risk of over load in capacitors.

What are the benefits of using a Detuned Reactor?

The typical benefits of a detuned reactors are as follows: