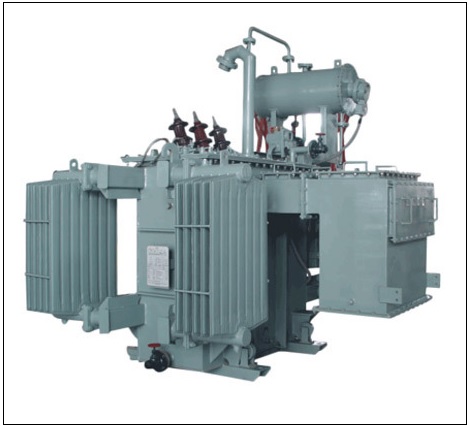 Oil coolant has two distinct advantages over the air coolants.

The transformer is immersed in oil and the heat generated in the cores and the windings is passed on to oil by conduction. Oil in contact with the surface of windings and core gets heated up and moves towards the top and is replaced by the cool oil from the bottom. The heated oil transfers its heat to the transformer tank through convection and which in turn transfers the heat to the surrounding air by convection and radiation.

This method can be used for the transformers having the ratings up to 30MVA. The rate of heat dissipation can be increased by providing fins, tubes and radiator tanks. Here the oil takes the heat from inside the transformer and the surrounding air takes away the heat from the tank. Hence it can also be called as Oil Natural Air natural (ONAN) method.

In this method, the heated oil transfers its heat to the transformer tank. The tank is made hollow, and the air is blown to cool the transformer. This increases the cooling of transformer tank to five to six time its natural means. Normally this method is adopted by externally connecting elliptical tubes or radiator separated from the transformer tank and cooling it by air blast produced by fans. These fans are provided with automatic switching. When the temperature goes beyond the predetermined value, the fans will be automatically switched on.

In this method, the oil is cooled in the cooling plant using air blast produced by the fans. These fans need not be used all the time. During low loads, fans are turned off. Hence the system will be similar to that of Oil Natural Air natural (ONAN). At higher loads, the pumps and fans are switched on, and the system changes to Oil Forced Air Forced (OFAF). Automated switching methods are used for this conversion such that as soon as the temperature reaches a certain level, the fans are automatically switched on by the sensing elements. This method increases the system efficiency. This is a flexible method of cooling in which up to 50% of rating ONAN can be used, and OFAF can be used for higher loads. This method is used in transformers having ratings above 30MVA.